What is the best cryptocurrency to buy for recovery this week? With the crypto market still down in the doldrums, it is understandable if investors might shy away from cryptocurrencies like Bitcoin. Many have pointed to the bull run being over and demand for crypto assets has admittedly slowed down. Let’s jump right in.

Bitcoin remains the topmost and most popular cryptocurrency available. As expected, it is also one of the best cryptocurrency to buy given its growing adoption globally.

The most significant allure of Bitcoin is the fact that it dominates the market. Where Bitcoin goes, the other assets will follow – especially now that the market is experiencing a pullback. Everyone knows how Bitcoin has performed thus far – after reaching an all-time high above $64,000 in April, it dipped into the high $50,000 range for a month.

When the market downturn hit, Bitcoin immediately plummeted. Several attempts to regain its highs have failed, and the asset bottomed out at $24,761 on May 29.

Entering into this week, Bitcoin is trading at $31,329 – down 0.5 percent in the last 24 hours and down 7 percent in the past week. The asset could still slide below the $30,000 mark, with Grayscale Investments set to release $1.4 billion in Bitcoin over the next week. That event could trigger a selloff that will drag the market down.

Whether the Grayscale event does trigger a selloff or not, Bitcoin is available for a bargain right now. The asset’s technicals are also quite strong, with a relative strength index (RSI) of 39.04 and a 20-day moving average (MA) of $33,200. 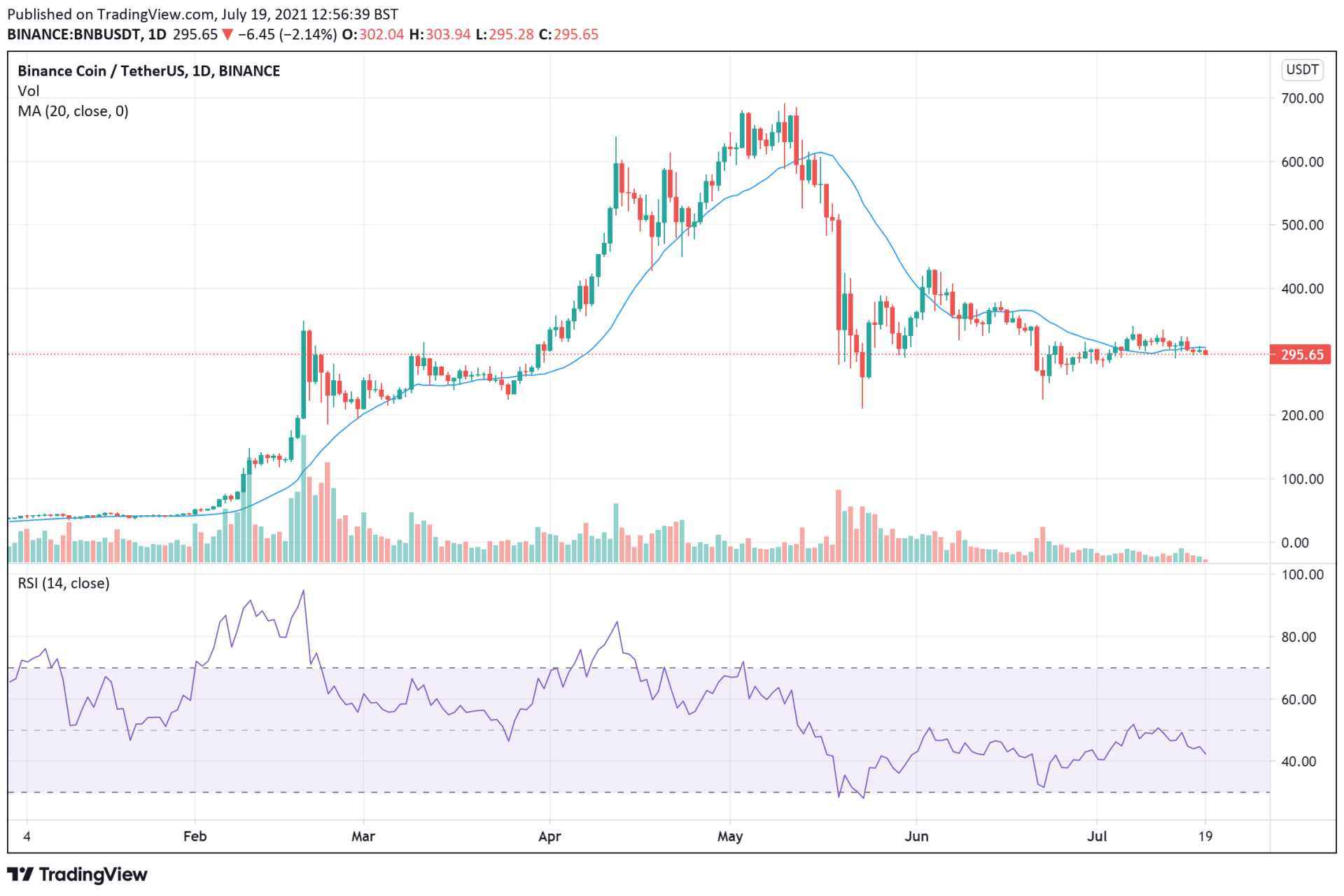 Like all large-cap cryptos, BNB rose to new highs during the market bull run.

After hitting $691.89 in May, it subsequently fell due to the market downturn. BNB bottomed out at $211, and it has been through several bullish and bearish cycles since hitting $290.

Ever since it dropped in late June, BNB has been unable to cross $350. The asset has hit the $320 range a few times, but bearish forces continue to hold it back.

But, like Bitcoin, there’s a lot of upsides for the asset. BNB will be one of the assets to make the biggest jumps when the market does eventually bounce back.

BNB’s technicals are also pretty good, with an RSI of 42.93 and a 20-day MA of $306.04. BNB’s unique position as the fuel for the growing Binance ecosystem is also a good signal making the BEP-20 token one of the best cryptocurrency to buy for a bargain right now. 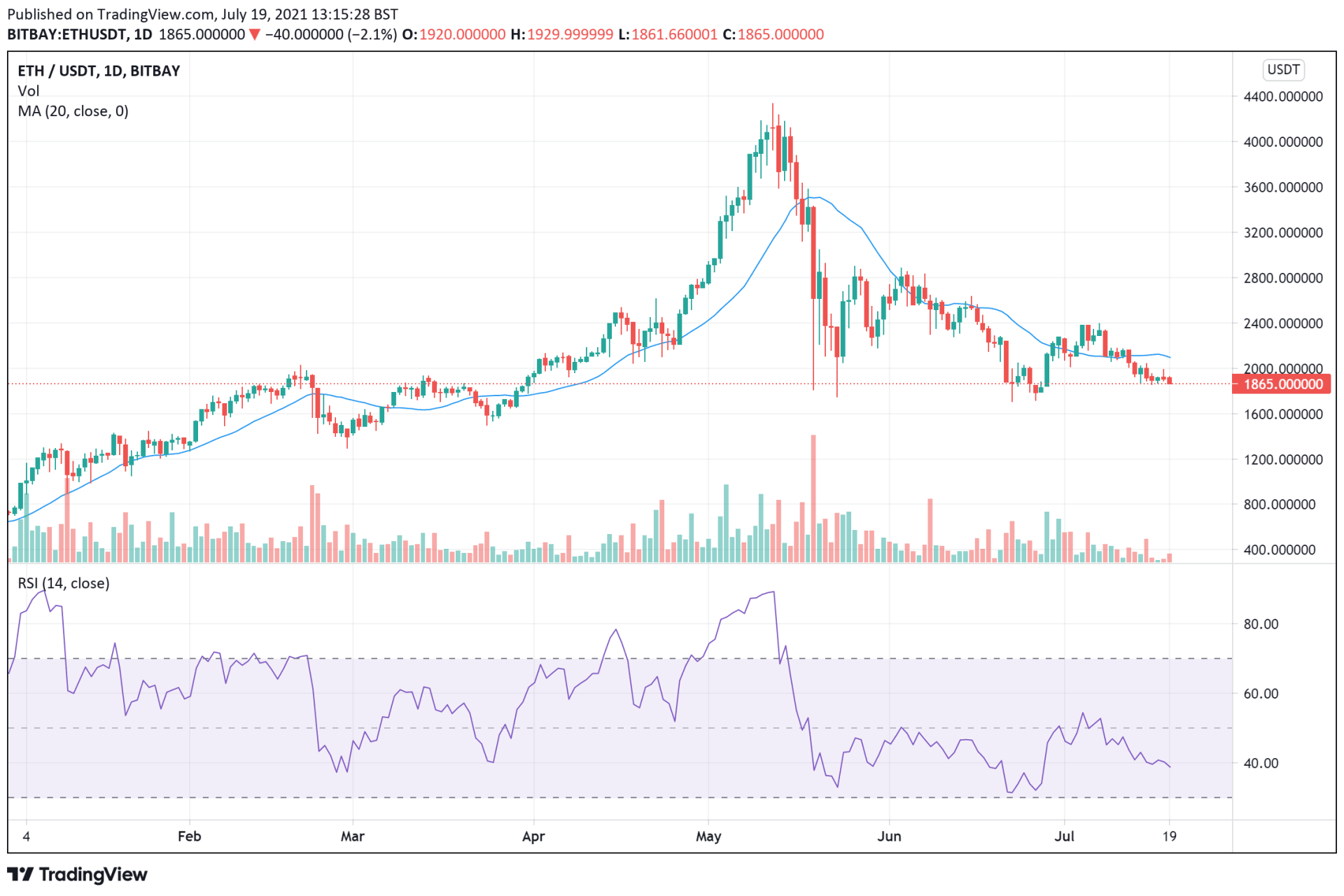 Ether is the second-most valuable cryptocurrency and one of the best cryptocurrency to buy given its significant stake in the emerging DeFi sub-sector. The digital asset’s market cap is only surpassed by Bitcoin, although it is growing to have more use cases than even the latter.

With the Ethereum blockchain still in massive demand, Ether has a great value proposition, and some analysts even believe that it could eventually knock Bitcoin off its perch. 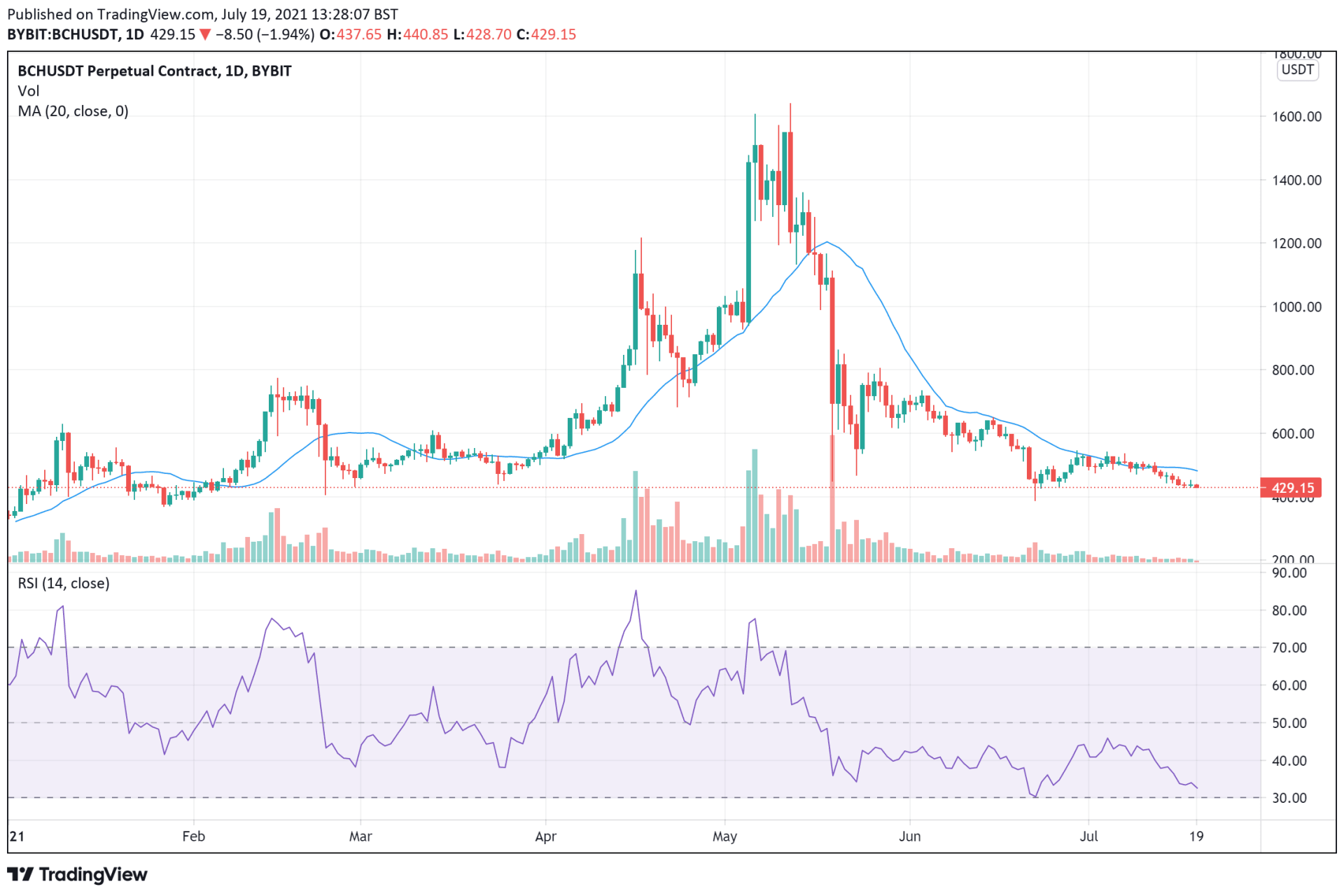 Bitcoin Cash is perhaps the most popular and valuable asset to fork out of the original Bitcoin. The asset has had two successive price drops, the first being the downturn that happened in May. That price slump dragged BCH from $1,644 to $471.05 in a matter of 10 days.

BCH is currently trading at $429.15 – down 3.3 percent in the last 24 hours and 12 percent in the past week. With so much distance from its high, it is expected to see big gains as soon as the market picks up again.

With an RSI of 32.41, BCH is severely underbought. It will need a bit of a push to get to its 20-day MA of $475.45, but that point isn’t so far off. However, its continued affiliation with the Bitcoin name could keep it in investors’ sight for some time to come. This makes it one of the best cryptocurrency to buy for a potential bull run. 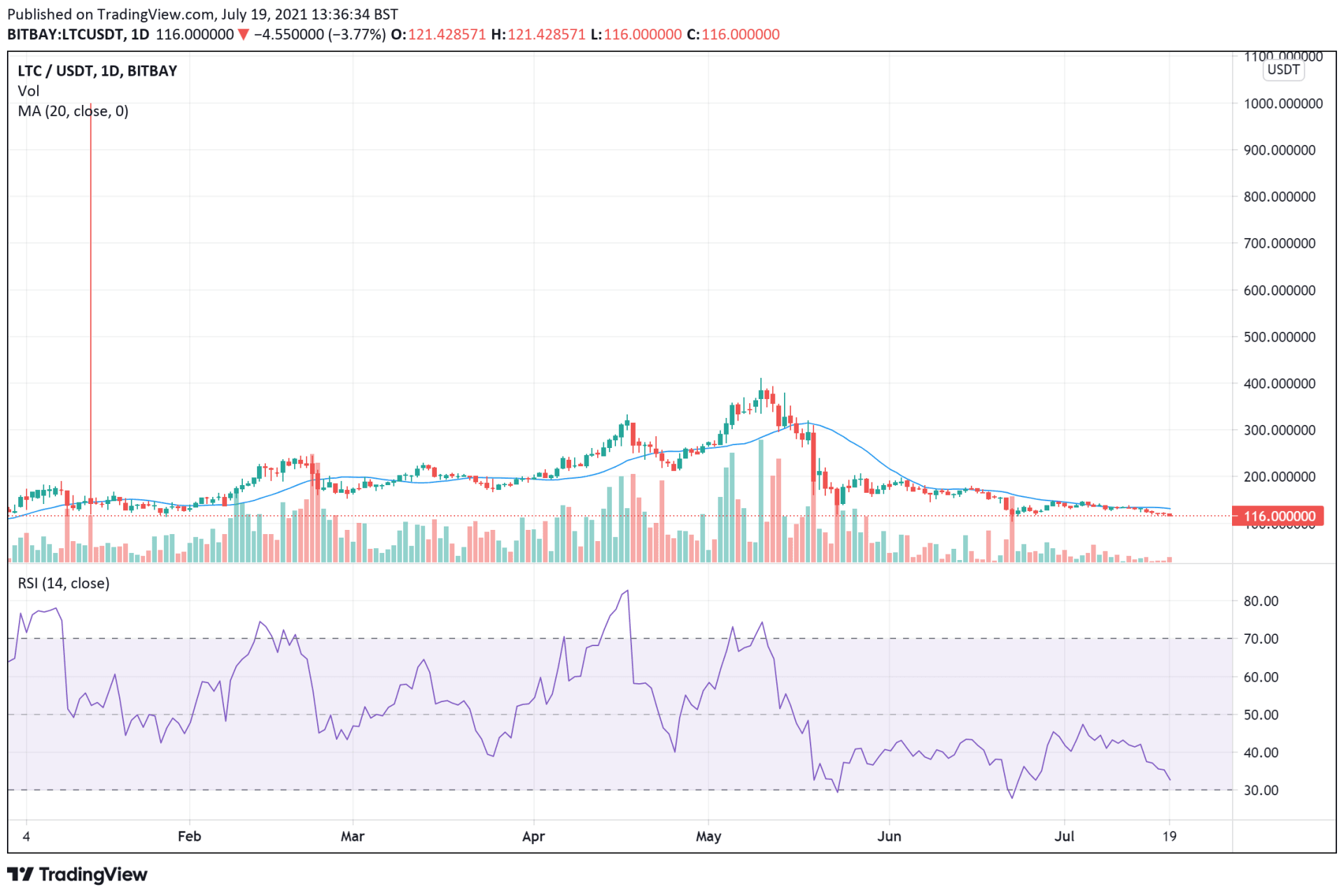 Once the third most valuable cryptocurrency, Litecoin has given way to the rise of assets like BNB. However, this isn’t to say that it doesn’t have any value. Litecoin has been nicknamed the silver to Bitcoin and it has continued to stay in the top 20 ranks making it one of the best cryptocurrency to buy.

Litecoin had an impressive performance during the bull run, jumping from $126.8 at the beginning of the year to hit a high of $412.3. But, all of that has been erased as the asset has seen successive lows, and its value has plummeted entirely.

LTC is currently trading at $116, which is down 6.3 percent in the past day and 19 percent over the past week. Bears are now defending the asset’s downtrend, and there are fears that the asset could slide even further.

But, drops are where the most opportunistic investors can get in and capitalize on gains. With the asset sporting a 33.44 RSI, it could gather enough interest and buy-ins to break the 20-day MA of $127.4 eventually.

One of the biggest issues with decentralized exchanges is price and order manipulation. The Injective Protocol promises to eliminate these problems with its decentralized layer-2...

Decentralized Autonomous Organizations DAOs provide hands-off governance for blockchain projects. One of the more recent projects disrupting this space is API3. The project aims to...

Exercise is good for the body, but how much we exercise at any given time depends on a number of factors, including our level of...

The sports field has been one of the most accepting of cryptocurrencies in recent years. Teams are launching fan tokens and other assets to engage...

Volatility is a major issue in the cryptocurrency space. The price of Bitcoin, the most important crypto asset, frequently rises and falls. The Terra blockchain...

Proton allows users to move funds and crypto between blockchain networks and conventional banks with a verified username. This allows them to withhold sensitive information...

You may have missed

US Treasury yields are soaring, but what does it mean for markets and crypto?

Ghana set to catch up to Nigeria and Kenya in terms of crypto adoption: Chainalysis